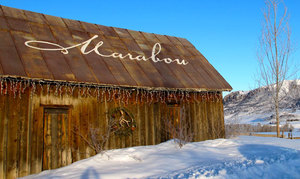 One of the first things that SF Capital principal Will Stolz did after his company purchased 19 Marabou Ranch estate lots this month for a little more than $12 million was to direct Marabou sales executive John Hillenbrand to remove them from the Steamboat Springs multiple listing service.

SF Capital Group, based in Atlanta, will wait for Marabou lots already on the market to clear before returning to marketing its new acquisitions under more favorable conditions.

“We’re going to take our inventory and sit on the sidelines,” Stolz said in a telephone interview Thursday. “We don’t really have a set time frame. We see a lot of value there. Our gut is that the market is beginning to turn. How fast is unknown.”

Marabou is about five miles west of Steamboat Springs and comprises almost 1,800 acres. Sixty-two homestead lots clustered on the overall acreage there came on the market in 2006 for list prices of $1.8 million to $5 million. Forty-two lots have sold since 2006, but some have been foreclosed on, and few homes have been built. The fourth house to be built there was nearing completion in July 2012.

When the lots in the ranch preservation subdivision are returned to the market, Stolz anticipates it might be in batches of three or so, and as each group sells through, it might be possible to advance the pricing.

Lead Marabou developer Jeff Temple sold his own lot for $1.15 million just this week, an indicator of where the market is today and perhaps an indicator that SF Capital would not settle for a sale price at that level.

Steamboat Realtor Jon Wade, of Colorado Group Realty, said the prorated sales price of the 18 lots at $617,000 apiece wasn’t good news for the local real estate market in the short term but pointed out that it begins to reposition the development to find a market price and move forward in much the same way that condominium projects at the base of the ski mountain, like One Steamboat Place and Trailhead Lodge, have done. It’s what needs to happen when a developer holds inventory that cannot be moved, he wrote in his blog.

“Things only deteriorate until something like this changes the situation,” Wade wrote. “Buyers are out there looking, but it is hard to move forward when you wonder what the next sale will be at under bank pressure.”

Stolz said his company prefers to carry out developments, but since 2007, much of its business activity has been acquiring and reviving bank-owned suburban housing developments in the southeastern U.S. that stalled in the Great Recession.

Marabou was was brought to the attention SF Capital by individuals in the group who already were acquainted with Stolz.

“This was a little outside the box,” Stolz said. “We certainly didn’t set out to find Marabou, per se. It came about as a result of a relationship that I had with some of Elk River Partners’ principals, existing owners. This deal had no element of distress — they never missed a payment — they weren’t distressed; they were just tired. They just didn’t want to spend the energy, effort and capital” necessary to restructure Marabou for different times.

Stolz said that when he and his colleagues first came to the area to tour Marabou, it was with an open mind.

“When we looked at it, we went up there with no preconceptions about Marabou or the Steamboat market or anything else,” he said. “The more we saw it, the more we liked it. Words like irreplaceable get thrown around a lot in our industry, but it is really attractive to us. We think it’s virtually irreplaceable.”

Stolz explained that even if one could assemble the individual properties overlooking the lower Elk River Valley within sight of the slopes of Steamboat Ski Area, it would be difficult to put the capital together, and obtaining development permits here also might be very difficult.

Wade agreed, saying that the value of Marabou lots is bolstered by the unlikelihood they ever will be duplicated.

Marabou has substantial high-end amenities: In addition to growing grass hay and feeding a small herd of steers in recognition of the agricultural tradition of the valley, it maintains a trophy trout fishery in ponds fed by irrigation ditches and in the Elk River itself, which runs along the western boundary of the property a few miles upstream from its confluence with the Yampa River.

“I never fished any place that compares to Marabou, not to mention all the other things you do while you’re there,” Stolz said.

The ranch has a substantial lodge as well as a rustic but refined Western barn intended for entertaining. The ranch manager has saddle horses available, and there is a movie theater, a yoga studio and more.

Stolz acknowledge that since the economy has begun to recover from the recession, second-home buyers have become more sensitive to the cost to own resort property over time. He observed that Marabou was developed to be all-inclusive.

“We’ve got to find a buyer that’s comfortable with those costs,” he said. “One of the reasons we went forward is that when you look at what somebody pays for what they get, I think it’s a tremendous value.”

Stolz said he typically makes two trips annually to the Western U.S., one to ski and another to fish. From arranging ski lessons and fishing guides, he is attracted to the level of service provided by the existing staff at Marabou. Hillenbrand and the management staff remain in place.

“Jeff (Temple) and his partners did a tremendous job. As a developer, I have a high level of appreciation for what they created. They didn’t get it wrong. They just got caught in the worst recession in any of our lifetimes.”